(correction: Project was featured on Skip to my Lou, but  the creator of the project was a guest blogger from Polka Dot Chair.  My apologies.) 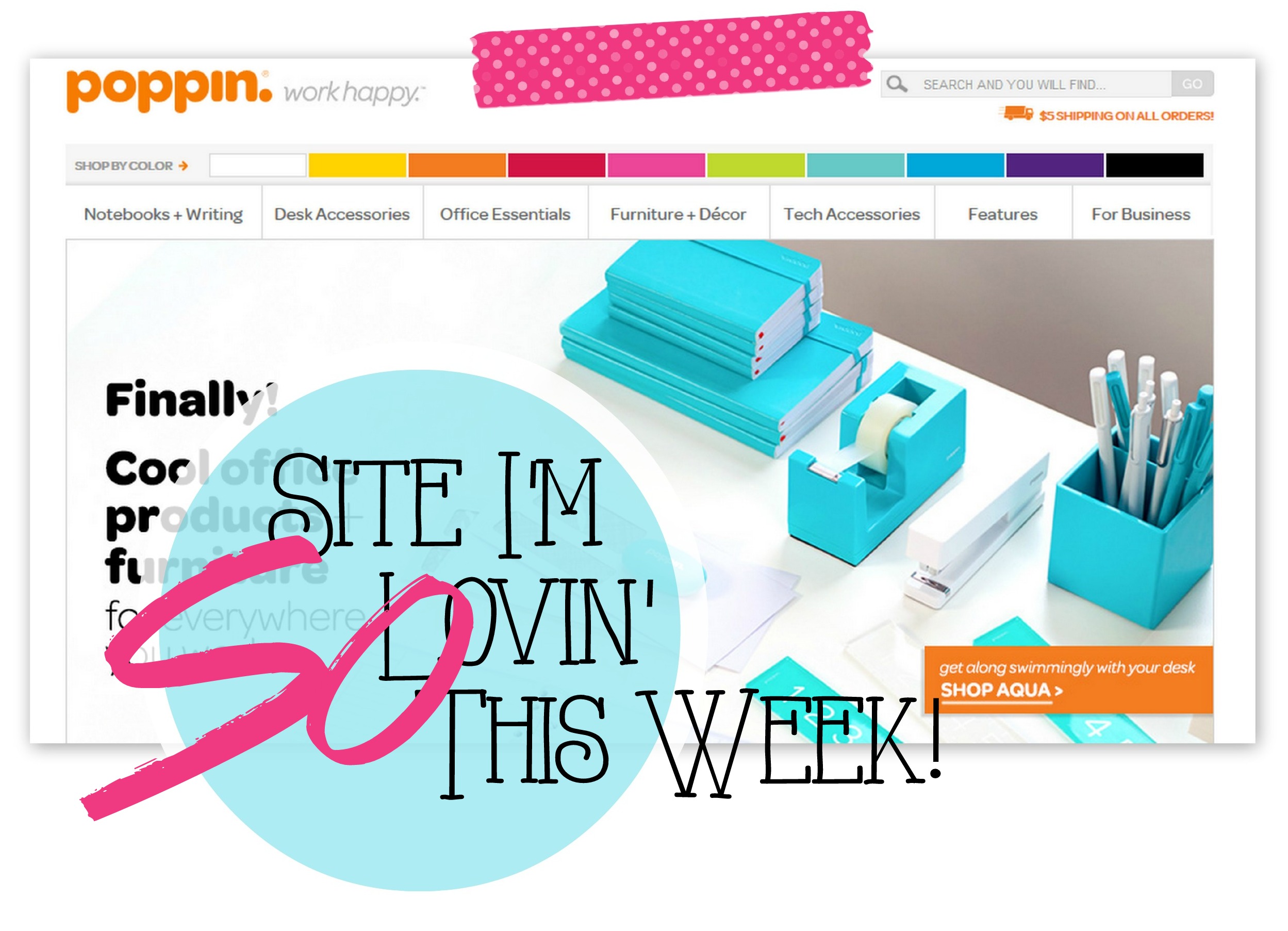 So, upon sifting through one of my favorite sites, Brit + Co., I happened to notice a sister site called Poppin.com.  I fell in love and it made me wish I owned an office.

Take a gander at what they offer or just head on over to the site I'm sooo lovin' this week:  Poppin.com 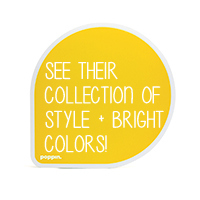 And you can mix and match items and create your own palettes. 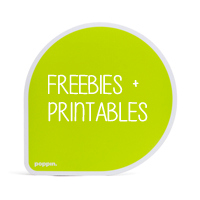 scissors! And they have desk goodies from a dartboard to tiki-style desk fringe!

Can we say "Mahalo"?

On their freebie page they also offer printables like lunch notes

...and genuine fake certificates!  This one would be given to me: 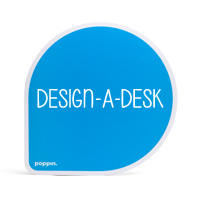 One of my favorite features is their Design-a-desk option. It gives you twenty different colors & palettes to inspire you to be the next "Little Miss Organized"! 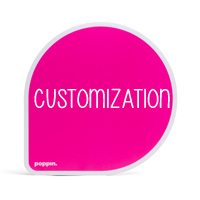 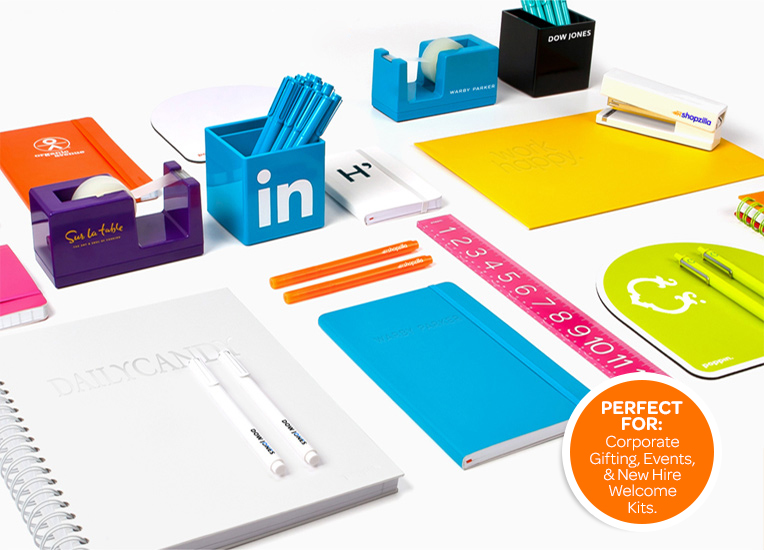 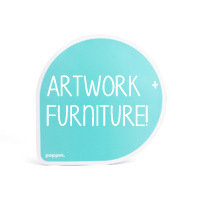 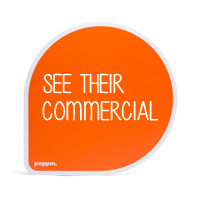 If video won't play you can view it on YouTube here 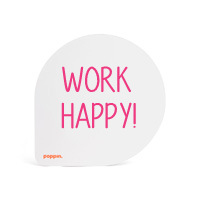 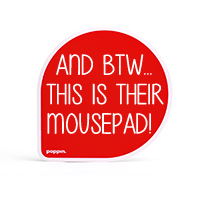 Now that I have assisted in your source of your next office supplies, you may need a little inspiration with design and organization.  Click below to check out my Office and Craft Room Pinterest board:

I've created a cassette single notepad and wanted to show you how to make one for yourself.

You're going to need a cassette single.
{I got all of these at Goodwill for about 50 cents a piece.}
.
...and this stuff:
.
Scissors
Paper Cutter {optional}
Embroidery Thread
Needle
Strong Tape
Beads
.
How to make it:
.
.
Step One:
Remove cassette... {ha ha, that was easy, huh?"}
.
Step Two:
This pic was taken to show you what NOT to do.  Do not peel the seam of the cover.  It will not be on the right side in order to turn into a notebook jacket.
.
Step Three:
Pay attention to where the opening will be and using scissors, cut vertically up the center.
.
Step Four:
This is where I messed up when grouping all the pics in a grid.  This pic shows the edges all cut off.  So see step five to know how this should happen!  {shame}
.
Step Five:
If you have a paper cutter this would be a good time to trim the excess to clean up the edges. {see pic 4}
.
Step Six:
Using a strong piece of tape {I used electrical tape, because of the color,} run a piece along the binding around to the inside.  Now, it just so happens that the width of the tape is the same width as the binding of the jacket.  If you have another type of tape you should probably only run it along the inside.  This step just adds rigidity to the binding.
.
Step Seven:
Poke 6 holes along the inside {or outside} of the binding.  Two at the top, two in the middle, and two at the bottom.
.
Step Eight:
Tie a knot at the end of the embroidery thread and using another piece of tape, adhere it to the inside of the jacket.
.
Step Nine:
Cut 30 sheets of paper measuring:  4" X 4.5" and separate them into two piles of 15.
.
Step Ten:
Fold all of the sheets lengthwise. Still keeping two separate piles.  {folding the 4 1/2" side in half.  When folded,
each piece should be 4 x 2 1/4}.
.
Step Eleven -- Fifteen:
See this tutorial from Crafster.org for threading process.
{She explains it much more thoroughly!}
.
Step Sixteen:
Leave about a foot of thread after you've done this process, and using color coordinating beads, string the ends of the thread.  Then knot at the end and snip excess.  This step allows you to wrap the thread around the book and tuck in the bead to hold it all together.  Once you do this, just wrap the thread around the book and tuck the end bead in.
. 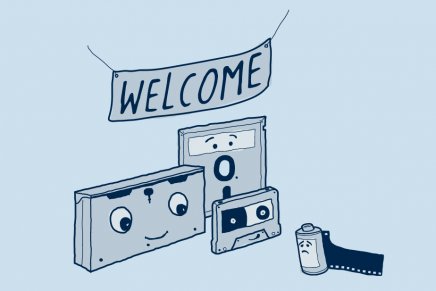 Ok, so I have a very simple project here and virtually

everything listed here is FREE

{or you have them right in your home.}

Now that I have your attention... I picked up these paint samples {I loooove paint samples!} at Ace Hardware {another thing I love} and figured I could do something with them besides hold a spot in a book.  {I don't even read books.}  I looked at the shape and the beautiful colors and thought long and hard about what I could make and VOILA!

I figured, everyone could use a little notepad in their pocket.

So here I will show you how to make a simple notepad for zero dollars.

Since not all paint samples are created equal, hold the sample and pretend fold it as to make sure the text {names of colors} will be right side up once completed.

{My first attempt was a fail in this area.}

Fold one of the ends on the split line they give you between the bottom color and the one next to it.   {I chose the palest toned end for this so the darker color would be the cover and therefore, most seen.}

Grab the opposite end and fold it so the "tucked" end is about 1/2" from the end of the first flap.  This is to give room for the staples to hold the pack of paper.

Press it down smoothly so it has a nice crease.  This is a good time to have a bone folder.  Martha is a big fan of those.  They make fold lines in paper really easy and flawless.  But if you don't have one, it's ok.  Just take your time with pressing it so you don't have a crooked outcome.

Put this cover aside to work on your paper.

Grab about 4 sheets of paper.  I used kids drawing paper because

A.) It's super easy to tear when you

are tearing it out of the book.

Using a paper cutter, cut your paper about 1/8" to 1/4" smaller than the width and height of the inside of the book surface.  {If you don't have a paper cutter, not a big deal, you can use scissors.  It just takes a little longer.}  I had enough to make about 24 sheets of paper for my stack.

Stack them so they are all as even as can be and slip them into the small folded area as tight as you can and hold it there closing the large flap over the small flap.

Using the edge of the large flap as a guide, staple about three to four times along the bottom, making sure you have the paper within the staples.  The large flap assures that you wont staple too far up and it also helps in lining up the staples in a row better.

Insert the large flap into the small flap.

Since the staples can seem unsightly, add any embellishments desired to cover this area.  On the blue one above, I hot glued a bow with a complimenting color to the notebook wrapping it around to the back.

On the pink one {pic 16} I added a little sign that reads "notes" and trimmed in gold marker for depth.  On the mini green one {slightly in pic 16} I also added ribbon and rounded the corners with my handy-dandy corner punch. It's pretty important that the staple backs get covered as they can be dangerous and/or catch on something in your purse.

These are great for quick party favors where you can just add a "thank you" label around them and a golf-game-sized pencil.  Or you can make a colorful set and they can be added to a stationary gift set in a basket or tin with pencils
for a last minute gift idea.
.