Don't Buy Him Ties For Father's Day...TIE His Ties!

(also known as the "Cape Knot")

We Can All Learn Something From Captain Jack!

We can all learn something from Captain Jack Sparrow!  In order to change our lives, we must change our attitude!

(correction: Project was featured on Skip to my Lou, but  the creator of the project was a guest blogger from Polka Dot Chair.  My apologies.)

June 6th is National Donut Day and you know how I roll.  When there is a silly interesting national holiday, I go all out to show you trends from awesome to zany to check out. Because besides Homer Simpson, who wouldn't want to don a blinding repeating pattern of America's favorite donut drowning in pink frosting and sprinkles on their sweatshirt?
I'll have you know, this post wasn't easy.  I couldn't refrain and this list could  not...I repeat: could NOT be titled "Baker's Dozen" alone.  Thirteen wouldn't have cut it. There was just so much to share with you.  They are sooo pretteee. And frankly, I have a stomachache from all the donut binging I have done for your viewing pleasure....  It was a sacrifice, I tell ya!

Psst...It's also National Yo-yo day, so if you're not a fan of donuts, you still have my permission to throw some confetti....Yay, Yo-yos!!

1.  Can you imagine how yummy these cookies with gummy bears must be?

2.  I love the idea of filling a family tree with photo printed leaves!

3.  A simple, novel card idea for when you miss the one you love.

6.  I'm on "Cloud 9" about this adorable ceramic pendant from Shoppe!

8.  This beautiful cake topping inspires me to add sticks of gum for typography!

So, have you ever heard of "Arm Knitting"?  Me neither. But all of the sudden, I see it poppin' up on Pinterest... then I see it everywhere!  (Does that ever happen to you?)  Anyway, I have NEVER knitted or crocheted, unless you count finger crocheting, which my mom taught me as a kid.  (Picture me at 14 saying: "Omg!... I could sooo make that!I  So I remember making a scarf for my  teacher.  Now in hindsight, I realize she lived in Florida, too but, hopefully she travels?)
So I clicked on a few tutorials and was blown away.  I live in sunny, south Florida where it's only cold aboooouut 2 days out of the year, so I really don't have much of a need for one of these things but I would love to try it.
Here are a few videos I came across that may inspire you to make your own.  And I would love to know if you tried it and how it came out.
I love the texture in this one below.  It's real dense and soft looking.  I'm sure that can all depend on the quality and texture of the yarn you're using.
What do you think? Would you ever give this a go?

Thank You, God, For Daddy  /  Mister Seahorse  /  Because Your Daddy Loves You
/  Saturday is Dadurday  /  Butterfly Kisses (Here is the baby version)  /  I Love You, Daddy!
Here's another list in case I missed any: Scholastic

(she also has a grandpa version)

(recipe for chocolate-walnut fudge bars are also on site)

20.  Printable Tie to Design For Dad to Wear! (this is a valentine post but could definitely work for Father's day.  |  via my creative way

I came across this amazing set of illustrations and really felt the need to share them with you.

They are by fashion illustrator, Katie Rodgers of Paper Fashion.  She has amazing work on her website and has an interesting technique with her watercolors where she adds jewels and it really brings the finished pieces to life!

This one below is my favorite.  It's from a series called "Far Far Away"  It looks like such a dream world...Isn't it just mesmerizing?

Below is a sample of some more of her art.  (If you notice, the one below/right with the star pants has subtle animation too.)

As you can see below, she's not like any other fahion illustrator.  She sets herself apart by her signature touches like animations, real embellishments like glitter and sequins, and the signature "doodle circles" and scroll work around key areas in the body and face. 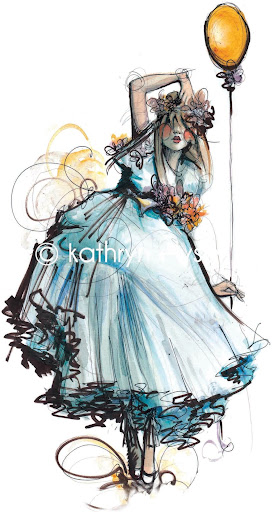 And if this bottom image looks familiar, you may remember it from the "Gatsby Inspired" post I did a few months back.

Head on over to her site to check out what she has. And you can purchased her prints in her shop. My sister needed a gift for her BFF and claims she doesn't have a crafty bone in her body, so she asked me to help her with an idea and assistance in creating it.  I thought this keychain would be a unique idea that she'd be sure to not already have.  It was inexpensive and personalized.

I've been seeing these types of keychains online between $15.-$30. and that's just on Etsy! I don't even want to look at the prices for retail.  So I decided to make my own.

8 Links to Buzz About

1.  I love this wall arrangement with keepsakes in plexi covered shadowboxes

2. These scary monster bookends could be a bookworm's bestie!

3.  Watching the drum-off with Will Ferrell and Chad Smith on Tonight Show with Jimmy Fallon made my night!

4.  Here's what you miss when your face is stuck in a smartphone

5.  I love the idea of painting my grocery list!

6.  My new picture book Love Monster (a gift for my son) was a delightful read.

7.  DIY these adorable pine trees made out of a common kitchen staple!

8. One of the greatest songs of the 90's has been made into comic art.

For today's post, since this is Bob Dylan's birthday, I figured I'd make quote art inspired by his 1974 song, "Forever Young" which I love.  The lyrics are so sweet and beautiful.  He is truly saying what every parent wants their child to hear. The lyrics are listed below the art.  I personally would like to dedicate this song to my son, Maddox.

I also highly recommend picking up (or checking out at your local library) Forever Young by Bob Dylan, the children's book based on this 1974 classic and inspired by the birth of his son, Jakob (who later became the frontman of the band The Wallflowers, releasing a single in 1997 that you may recall titiled  "One Headlight").

I consider Forever Young to be one of the most uplifting books to keep in your child's collection as I find it to be quite uplifting holding the same caliber as Dr. Seuss, The Berenstains and Eric Carle.  Not to mention, the illustrations by Paul Rogers are adorably simple and refreshing.  Below is the visual reading through his singing, page by page.   Enjoy.